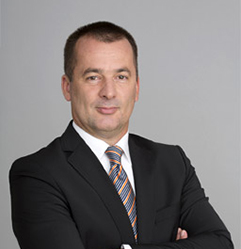 
Education and Professional career
Michael Harter has over 15 years experience in the German and international real estate market. His apprenticeship as a bank clerk, his degree in engineering - with particular focus on city and regional planning - at the Technical University of Berlin and a Masters degree in Economic Geography from the University of Toronto are the foundation of his extensive expertise.

His thesis, on “The evolution of Canadian shopping centres” with particular focus on shopping centres in the greater Toronto area, was the trigger for his long term involvement at a renowned Berlin investment firm as a Project Developer for high volume commercial development in: office, retail, hotel business etc.

In the year 2000, Michael Harter graduated from the European Business School with a degree in Real Estate Economics.

During his ten years working as a project developer, he has met leading “Headhunters” appreciating Mr. Harter’s advices concerning their current searches. Inspired by these personal relations, he ventured to join a recruitment consultancy firm in Berlin in 2007. Having been among the two economically most successful consultants in the company, he decided to build his own professional team focusing on real estate executive search in the very same year.


Nowadays, Mr. Harter and his team supervise ambitious clients in the German, Austrian, Swiss and other international real estate markets. The search was focused in residential, commercial, retail, hotel and logistical assets with the goal of finding the best available rest estate professionals on the market. International clients benefited from good language skills and intercultural experiences.

Mr. Harter offers numerous contacts in various markets. These include eastern European contacts that have been maintained since his first visiting in the region in 1989.

Areas of emphasis
Executive and specialist search in the following areas: